Welcome to the Corby and Kettering Trades Council Blog

Welcome to the Corby and Kettering Trades Council Blog.

A great day for the Trade Union Movement 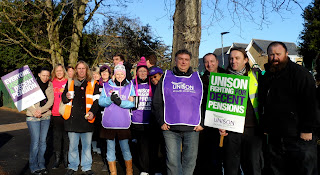 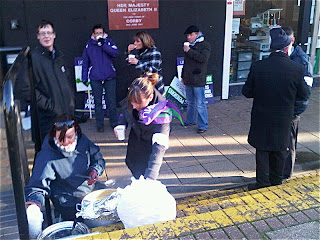 Deene House Corby
Brave trade unionists from Corby and Kettering joined picket lines from early morning and made their presence felt. The public support was fantastic in most areas.
Corby and Kettering Trades Council delivered soup to members in the two towns. It was warmly welcomed on this cold day.
A huge thank you to all who joined picket lines and protests throughout the County we made our voices heard !!!!!!!!!!!!
Posted by Natalie at 21:06 No comments:

Our Support for strike on 30th November 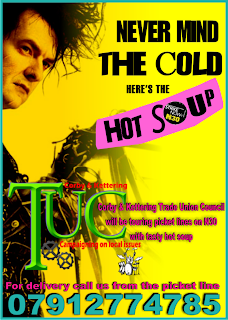 On Wednesday 30 November we will see the biggest strike in 85 years as 3 million public sector workers from 20 different unions take industrial action in defense of pensions, wages, jobs and services. The Corby and Kettering Trade Union Council will be out and about on the morning of the big day supporting workers on their picket lines and building solidarity and confidence. We will also be delivering hot tasty soup to those on the picket lines and please call us with your location on 07912774785 .
If you can't make it, you can still play an important role by talking positively about the strike with your colleagues, or simply driving by a picket line and tooting your horn in solidarity; even the smallest act can bring positive change.
Whether you work in the public sector or not, this is your fight. We are all inter-connected and reap the benefits when workers take this kind of action and win.
And this is a battle that simply must be won, because defeat will lead to lower living standards for all of us and.
So please do what you can to support the strikers and spread the word on November 30 and let's show this rotten Tory government we stand united and we're ready to take them on!
You can help support the picket lines we will be meeting at Corby Trades and Labour Club at 10am. 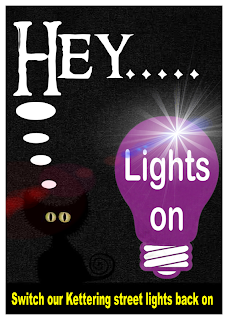 There will be a protest in Kettering this Sunday 31st July, urging NCC to turn the streetlights back on. We are congregating for a march at 6pm, followed by a rally at approx 7pm.
We are assembling for the march at 6pm outside Kettering Swimming Pool in London Road car park, London Road, Kettering, NN15 7QA.
The march will be along Bowling Green Road, Northampton Road, Northfield Avenue, Meadow Road, Market Street, then ending up at the Market Place for a rally.  Please come along and bring placards, whistles and horns etc.
This is a community led demonstration supported by Trade Unions. Stewart Campbell, President of Corby and Kettering Trades Council will be speaking at the rally.
Posted by Natalie at 14:15 No comments: 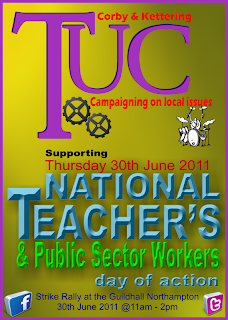 On Tuesday 14th June 2011 Britain's teachers have paved the way for a million-strong public-sector strike, voting Yes in two ballots for industrial action over attacks on public-sector pensions. Then on Wednesday 15th more than a quarter of a million civil servants became the latest group of workers to back nationwide strikes on June 30 over attacks on public-sector pensions. The PCS union has promised to co-ordinate any action with the National Union of Teachers (NUT), the Association of Teachers and Lecturers (ATL) and the University and College Union (UCU).
Teachers, jobcentre workers, airport staff, traffic controllers, police support staff and immigration officers will walk out in anger over government plans to make them work longer and pay more for worse pensions. Why should the government be surprised that public-sector workers, many of them pretty poorly paid, faced with an onslaught on their pensions and frozen pay, decide to fight back? It would be surprising if they didn't.  June 30 promises to be a magnificent day of resistance, which should be the first engagement in a campaign to defeat the anti-worker policies of this illegitimate coalition.
Previously at the Corby & Kettering Trade Union Council’s AGM on the 8th June delegates voted to support public sector workers should a day of action be announced. We will now liaise with our PCS delegates and show solidarity as well as attending a strike rally at the Guildhall, Northampton between 11am – 14pm. PCS union will also provide coaches for those across Northants who wish to attend. More information nearer the time.
Posted by Natalie at 11:43 No comments:


Yesterday’s expectations at the Northampton County Hall soon came to a crashing end when it was quite apparent that the Tory lead Northampton County Council were merely paying lip service to the notion of transparency at the public meeting. The day’s business was a packed agenda and when it came to the turn of Corby Streetlights the Tory Chairman showed his arrogance and at times inconsiderate to the plight of the speaker who had a legitimate case on behalf of the Streetlight Group, as he sat perched in his chair with his arms folded and interrupted speakers as they sat before him.
County Councillor John McGhee from Corby and a member of our TUC committee went on record and told the Cabinet that he has no apologies for yesterday’s protest and our actions was born out of frustration that the NCC has ignored the plight of the Corby people. Furthermore, he added, as Corby lights are the first to be switched off… can he have the Cabinet’s assurances that when the new lights eventually come, Corby will be the first to be re-connected? Of course there was a deadly silence and no reply from the Chair or Cabinet and the speaker went on to say “please”.
For some time now the Corby & Kettering TUC has argued that the issue of street lighting is political and is an example of the Tory ideological-driven assault on public services… and today’s frustration of not being heard proved just that.
However all is not lost. There is also a remedy to this onslaught, although we must be patient and organise for a long haul campaign. Certainly we must build a united front through a local movement called the Corby & Kettering Trade Union Council. Our strategy is not complicated….in fact its brilliant. By linking up trade unionists with student, pensioners, community groups, tenant associations, the unemployed and welfare we can take this fight to the ballot box and oust those County Councillors from office next year who are all complicit in budgets before the safety and welfare of the people who they are elected to represent.
Shame on them all….
Posted by Natalie at 09:13 No comments: 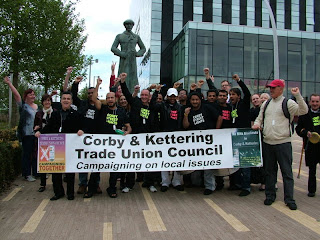 We Made some Noise !!!!!!!!!!
Joined by the community Street Light Campaign group the Trades Council created enough Noise with whistles and drums to Stop the speeches going ahead as the County Council had planned at the opening of the Corby Walk. We will keep up this campaign to Stop any politician in trying to fool us with their good news rhetoric  !!!
Posted by Natalie at 13:30 1 comment: 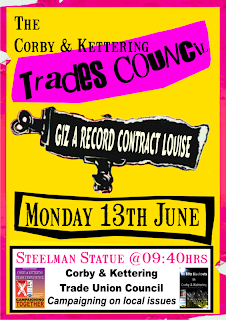 Join our campaign “ Make them Hear us Make some Noise “
Posted by Natalie at 10:52 1 comment: 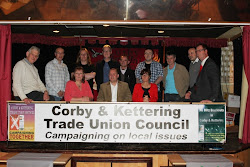 Union delegates to the New Corby and Kettering Trades Council 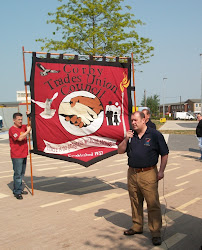